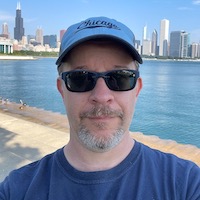 When I was younger I developed an interest in computers, electronics, and radios. I used to take things apart to figure out how they worked.I listened to shortwave radio stations and would decode RTTY on my Commodore 64. In High School I joined the Ham Radio Club but it disbanded shortly thereafter. I never mastered Morse code enough to get my license. I studied Electronics Technology in college and ended working on GE and Motorola communications devices which led to to a short lived career as a Police communications officer. A supervisor told me I had too much talent to be stuck like he was I switched careers and went into Information Technology. My interest in radios waned as I went deeper into computers. My interest in electronics returned when the Raspberry PI came out in 2012. It would take another eight years before my interest in radio returned.

In late 2020 I started helping a friend and former co-worker with using AWS for a project at the Adler Planetarium where he was a volunteer. The meetings and work was all being done virtually due to COVID restrictions this helped break up the monotony of mostly being stuck in the house. Shortly thereafter I also became a volunteer with the Far Horizons team at the Adler Planetarium where I started to work on the GONet and later NITElite projects. It was here that many of my past and current interests converged, electronics, coding, computer qnd radio. Working on the NITElite project introduced me to APRS which is used to track the high altitude balloon (HAB). APRS operates in the 2M band and requires a minimum of a Technician Class Amateur Radio license, which I finally got around to getting in August 2021. My original callsign was KD9THB but when I passed the General Exam in May 2022 I changed it to W9BLN.